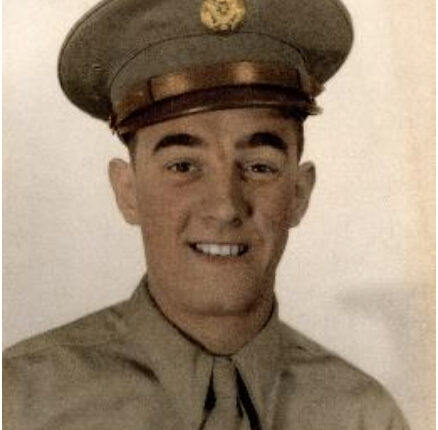 In January of 1943 three seniors left Deep River High School to enter service. Herbert Kurze, an outstanding athlete from the class of 43 was inducted into the army on Jan 30th with fellow classmates Robert Ressler, and Lewis Francis. The Journalism Club dedicated the second edition of “This Year” the Deep River High School yearbook to the members of the Class of 1943 who have become members of the armed forces and “, especially to those boys who were the first to leave.”

Herb did basic training in Miami, Florida, and was transferred for further military training in Lincoln Nebraska, at airplane engine mechanic school. He was sent for further training in San Diego, California, to the Consolidated Aircraft Factory School to specialize in B-24s. His first flight was aboard a B-24 to Tuscan, Arizona where the B-24 was modified to meet Army specifications. He was transferred again to Salt Lake City, Utah (“the crossroads of the Air Corps,”) in a “tent city” the airman learned where he would be assigned. Before leaving for his assignment, Herbert was transferred to Kearns, Utah for Carbine rifle training, then Mountain Home, Idaho Air Force Base for overseas training. Leaving Camp Shanks in Orangeburg, N. Y. on 16 April 1943 Herb was transported to the Firth of Clyde, Scotland aboard the unescorted ship New Amsterdam, which at the time was the fifth largest cruise ship in the world. From there he took a train to Glasgow and then on to England.  Herbert was assigned to the U. S. Army Air Corps 8th Air Force 490 Bomb Group, 851st Squadron, serving as a B-24 and then B17 mechanic in Eye England, station 134.

Herbert said, “As soon as the war was over in Europe I left Eye on a B-17, sitting on the floor with nineteen other guys. The name of the plane was “The Carolina Moon,” We landed in Valley Wales to fuel up and from there we went to Iceland. I remember looking out the window off the coast of Greenland at the icebergs and got a kick out of seeing a lot of rock in Iceland! Because we had bad weather, we were grounded in Iceland for two or three days, Next, we flew to Newfoundland, landed at Gander Field to refuel, and spent one day there. Finally, we landed at Bradley Field in Windsor, Ct.”

“Then I went by train to Old Saybrook, Ct., and then bummed a ride home! What a great feeling it was to be home! During those 30 days, I found out that the war ended in the Pacific. I was so relieved because that was where I was supposed to go next. Believe it or not, even though the war had ended, I still had to go to Drew Field in Tampa, Fla., and then to Stuttgart, Arkansas. When I got there, they said I had more time coming to me so they sent me home for a week. More trains!! I was discharged from the Army on October 22, 1945. I know it seems crazy, but that’s the way the Army did things. They had all these guys coming home from Europe ready to go to the Pacific and the war ended. Since everything was already in the works, it seemed like they were just moving guys around, because they didn’t know where to put them all. Altogether I was in the Army for 2 years, 8 months, and 23 days!” When he “mustered out” he was given $300.00 in installments, a hundred at a time, and $68.60 travel pay. Herbert came home and was an integral part of this community.