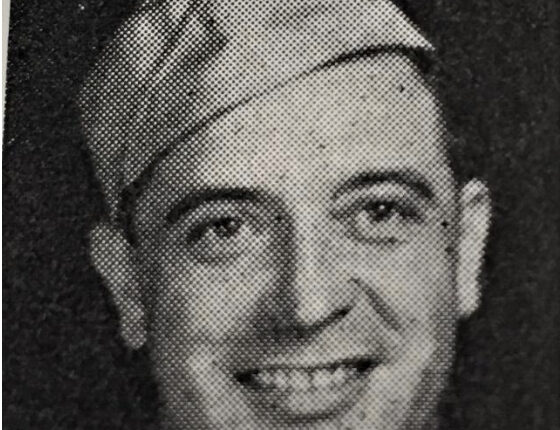 At age 29 Vic enlisted in the Army in 1943 and was stationed at Fort Blanding, Florida. He described his stay there like this, “The weather is very hot.  We start off at 7:45 am for our basic training, and at 5:45 pm we have retreat. I am with a swell group of soldiers. I’m a cannoneer on the 155 Howitzers – I love it! We have plenty of drilling and gun practice. Uncle Sam sure intends to make real soldiers out of us.”

Vic was assigned to the 66th Black Panther Field Artillery Unit and after basic training, he was sent to England. For the men of the 66th “Black Panther” Division, Christmas Eve in 1944 was miserable. They had arrived in England a month before and had hoped to spend the holidays with local English families. But when 28 German divisions plowed through the Allied lines in the Ardennes Forest at dawn on Dec 16th the 66th was ordered to prepare for deployment.

On December 24, 1944, men of the division loaded onto two Belgium crewed transport ships the Leopoldville and the Cheshire for a perilous channel run from Southampton to Cherbourg France. Once on the continent, the Black Panthers would relieve the badly mauled 95h division. Lurking in the waters surrounding Cherbourg were German U-Boats ordered to sink any Allied ships bringing supplies and reinforcements from England. A French Frigate and two English destroyers accompanied the two transport ships infrequently dropping depth charges to discourage enemy submarines But just 5 miles from Cherbourg U-Bost 486 spotted the Leopoldville and fired one torpedo striking the defenseless transport on the starboard side killing 300 soldiers instantly.  In the panic, the Belgium crew lowered the lifeboats and rowed to shore leaving the inexperienced GIs to fend for themselves. Rescue boats from Cherbourg were delayed because of the holidays. Rough seas further complicated rescue efforts preventing Allied ships from maneuvering close enough to the crippled ship Desperate GIs jumped to their deaths, crushed between the ships, or sucked under by the churning waters. 760 men were lost from the division. Those who were rescued saw action as the division faced 48,000 Germans at Lorient and St Nazaire in Brittany. A monument was erected at Fort Rucker, Alabama, dedicated to those who lost their lives in the disaster at sea and in the subsequent action in France. Vic was one of the lucky ones who made it home to serve his community and making an impact on the lives of many of our young citizens through the fife and drum corps.

Celebrating our WWII Vets-Edith May Anderson
Comments are closed.