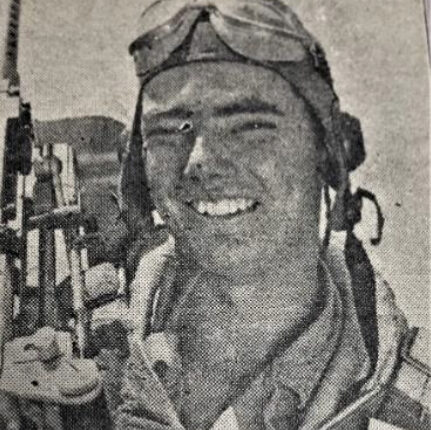 In 1941 John was a student at the University of Georgia and left for Canada to join the Canadian service. Arriving at the border on the day that Japan attacked the Philippines, John changed his mind and returned home to enlist in the U.S. forces.

He enlisted in the Army Air Corps in December of 1941.   Graduating from Harlingen Army Gunnery school in Rio Grande Valley, Texas in 1942, he was automatically promoted to Sgt. He became an expert in shooting every kind of gun, gunner bombardier, navigator, and pilot earning his silver wings. With his training complete he received sealed orders sending him to an undisclosed location.

In 1943 John wrote home to say that he was transferred to McCaw General Hospital in Walla Walla, Washington. He was on his way to recovery but expected to be in the hospital for another month. In his letter, he said how they had participated in several air raids over Kiska. On one of these missions, the ship was hit by 20mm shells. The radio man next to Holmes was killed. John saw a lot of thrilling action over the Aleutians.

Following his letter, Staff Sgt John Holmes called from Seattle Washington and told his mother that he had been flown out from the Aleutians and was being sent to the Barnes General Hospital in Vancouver, Washington. He was non-committal about his condition but his mother felt he has been wounded. She was anxiously awaiting more information. John did make it home and became an active member of the Deep River community.